Cazzani is re-entering the fray after a long hiatus. He has teamed up with Herb Stotler Racing and will be competing in the Superboat Unlimited Class of offshore racing in both the SBI and OPA circuits with a debut planned for August 2013. The new vessel is a Carbon Fiber 42 foot Platinum designed by Michael Peters and powered by Stotler Racing Engines. Cazzani will throttle the boat while Herb Stotler will handle the driving. For the 2013 Superboat International Key West World Championships, Scuderia Cazzani entered into a marketing partnership with ALEX AND ANI. 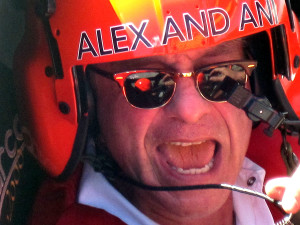 As a young man Serafino became familiar with Ferrari and Lamborghini eight and twelve cylinder engines. As a technician and owner of these vehicles Cazzani was very familiar with the scream and power produced by these relatively small displacement motors.

In 1987 Jimmy was surprised when his race boat engine builder instructed him not to rev the engines beyond 5800 rpm. To Cazzani this made no sense . Jimmy dissected the engines and decided to change their internal geometry which would change their operational characteristics. The engine’s internals were replaced with light, strong components. The change in operating range would require larger camshafts, better flowing cylinder heads, large volume intake manifolds and higher CFM (cubic foot per minute) carburetors. With the extra work produced by the new engine combination durability could become an issue but Cazzani kept the motors on a strict maintenance schedule and introduced lightweight, exotic titanium valvetrain components into the equation to ensure durability of these endurance racing motors.

Cazzani became one of the pioneering offshore racers to successfully utilize the high RPM potential of the Chevrolet Mark IV engines in an offshore racing vessel. His combination of short stroke / big bore contradicted the norm and permitted a significant leap in speeds and acceleration at a time when supercharging was prohibited by rule and displacement limited in The APBA Offshore “D” class.

Jimmy Cazzani’s accomplishments were chronicled in Propeller, Vapor Trails and Powerboat magazines. In 1990, when competing in Freeport New York, Cazzani also appeared as an off-set guest of The Today Show and has had considerable Sport Channel and ESPN coverage when competing on the ocean.